To highlight SBS as an EEG’s pitfall describing a case of FCD mimicking LGS. 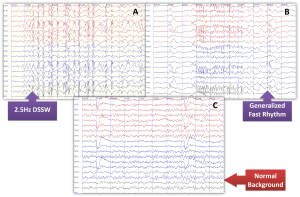 legend: (A, B) In LGS’s EEG pattern is expected a triad with 2.5Hz DSSW, generalized fast rhythm and poorly organized background. (C) However, in this reported case a curious finding was his normal background when awake not fitting with LGS diagnosis.

Figure 2: One electrographic seizure recorded during video-EEG with a focal beginning. 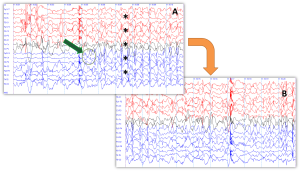 Legend: (A, B) Although DSSW morphology (asterisks), the recorded electrographic seizure begun at RFC region (arrow and circle), putting lights on a probably focal lesion.

Figure 3: The role of neuroimaging guided by EEG localizing the lesion. 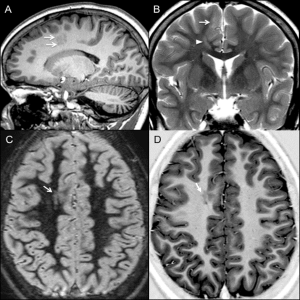 Legend: Once EEG recordings showed a focal beginning at RFC region, a 3T MRI localized the lesion (arrows) in right frontal parasagittal region in sagittal T1 (A) and coronal T2 sequences (B), such as axial DIR (C) and IR (D). The transmantel sign is shown as a head arrow in (B).