Failure of antiepileptic drugs in controlling seizures in epilepsy: What do we do next?

Abstract
Medically intractable epilepsy is a clinical condition of concern that arises when a patient with epilepsy suffers seizures and cannot achieve control of them, despite a trial of two or more antiepileptic drugs (AEDs) suitable for the type of epilepsy that are prescribed at maximum tolerated doses. This diagnosis could be related to cortical dysplasias. We report the case of a 5-year-old girl with
previously normal neurological development and no family history of epilepsy who presented with focal-type seizures at age 4. She started treatment by taking different AEDs for seizure control. She continued having frequent seizures that sometimes progressed to generalized seizures and status epilepticus. After a focal cortical resection was performed in the area where interictal spikes were detected, the  pathology confirmed a type IIb cortical dysplasia as the cause of the epilepsy. This article discusses cortical dysplasia as a cause of pharmacoresistant epilepsy and its treatment.

Background
Epilepsy is a common neurological disorder worldwide. Seizure freedom is the mainstay therapeutic goal of patients with epilepsy since repetitive seizures are associated with an increased risk of intellectual disabilities, mortality, and other comorbidities.

Case presentation
The patient is a 5-year-old girl from Costa Rica who came to our hospital, a high complexity hospital in Bogotá, Colombia, South America, in January 2011, because of medically intractable epilepsy. The patient’s seizures started at age 4. She was previously a healthy girl without any remarkable medical history. Her neurological development was normal. At the time she started having seizures, she was attending kindergarten. There was no family history of epilepsy.

From the beginning, her seizures started with left-sided head and eye deviation. The seizures lasted a few seconds, and she recovered  immediately. At that time, she was seen by a neurologist, and she started to take antiepileptic drugs (AEDs). Her brain MRI was normal
as well as her physical and neurological exams. Blood tests including amino acids were normal.

She continued having frequent seizures; later, they occurred almost daily. The seizure semiology remained as before with leftsided head and eye deviation, but followed with left arm extension and splutter sound. Sometimes, seizures progressed to a bilateral asymmetric tonic seizure, lasting for five to 10 seconds. According to parents’ report, a video-EEG showed bilateral discharges without ictal localization.

She had had two previous episodes of status epilepticus that needed hospitalization in the intensive care unit (ICU) for several days. By the time she was seen by us, she was having several seizures each day. She had three seizures during a visit in the doctor’s office at our facilities, and later, she was admitted in the pediatric ICU with status epilepticus.
Because of the patient’s seizures, she was not enrolled in school, and home schooling was difficult because of the side effects of AEDs and seizure frequency. The longest seizure-free period experienced by the patient was 16 days.
Previous AEDs included the following: carbamazepine, phenobarbital, lamotrigine (which provoked rash), clonazepam, oxcarbazepine, and topiramate. At the time we saw her, she was on levetiracetam, gabapentin, clobazam, and primidone. Her physical exam revealed ataxia because of the side effects of AEDs. No cognitive deficit was reported by her parents.
While she was in the pediatric ICU, a midazolam drip was started, as well as lacosamide 30 mg/kg. At the same time, continuous video-
EEG was performed. It showed interictal right frontal spikes and ictal right frontal onset-fast activity. Several clinical seizures were
recorded with the patient’s typical semiology.

Investigations
We performed a brain MRI with special images for cortical dysplasia that was normal. A brain CT PET scan after the patient’s status epilepticus was resolved that showed right dorsal frontal hypoperfusion (Fig.1). During the PET scan time acquisition, video-EEG was continued; no seizures were recorded (Fig. 1). 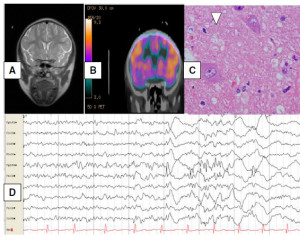 The patient’s case was presented in the neurology/pediatric neurology–neurosurgery–radiology conference management for epilepsy surgery. One week after the patient’s admission, she underwent a focal cortical resection guided by neuronavigation and intraoperative electrocorticography with subdural grid. Focal cortical resection was performed in the area where interictal spikes were detected. One electrographic seizure was recorded from the same area. The pathology showed a type IIb cortical dysplasia in the right frontal superior cortex.

After surgery, no seizures were reported and some AEDs were discontinued: When she was discharged she was on lacosamide and primidone (the patient’s parents reported some degree of seizure control with this medication). Six months after the surgery, the patient was seizure-free. She was only on lacosamide 20 mg/ kg. She went back to school, and is having a normal neurological development.

Discussion
Epilepsy is a common neurological disorder occurring during childhood with an approximate incidence of 45 per 1000 cases per year [1]. It is characterized by recurrent, unprovoked seizures. The first-line therapy for epilepsy consists of antiepileptic drugs (AEDs). However, other therapeutic options include surgery, vagus nerve stimulation, and ketogenic diet when AEDs fail to control seizures.
Seizures in approximately 20% of the pediatric population do not respond to the use of AEDs, and these patients are considered to have medical intractable epilepsy [1].
Pharmacoresistant epilepsy is defined as failure of adequate trials of two or three tolerated AEDs which were adequately chosen and prescribed at maximum tolerated doses to achieve seizure freedom [2]. Patients who are not seizure-free are at increased risk of sudden unexpected death in epilepsy (SUDEP), intellectual disabilities [3], poor developmental outcome, and other comorbidities such as depression. Moreover, it is associated with poor quality of life because of the side effects of medications, associated comorbidities, and failure to achieve or loss of independence [4].
Focal cortical dysplasia (FCD) is defined as a localized region of malformed cerebral cortex [5]. It is commonly associated with refractory epilepsy, and seizure semiology depends on the cerebral region that is involved. Our patient’s pathology was reported as a FCD type IIb according to the FCD classification consensus of the ILAE [6]. The pathology showed the presence of abnormal neurons with deposition of Nissl substance in their cytoplasm (balloon cells) and alteration in the cortical layers except the I-cortex layer. Focal cortical dysplasia type II is an important cause of refractory epilepsy and is usually encountered in extratemporal cortical regions. Our patient’s cortical dysplasia was in the frontal lobe, a region that is commonly involved. Seizures usually have onset in infancy, and there is a lack of understanding of their cause and why they are medically intractable [5]. The clinical, radiologic, and electrophysiologic studies in our patient showed a correlation of frontal cortical epilepsy foci with fast activity in the frontal leads in the EEG and hypoperfusion frontal foci on the PET.

While we performed a brain MRI with special images for cortical dysplasia, it did not show any structural abnormality in the frontal cortex. However, studies usually reported the presence of structural abnormalities in the brain MRI in patients with FCD type II, such as blurring of the cortical white-matter junction, focally increased signal in T2-weighted imaging, and cortical thinning [5] — findings that were not seen in our case.
The presented clinical case is the typical history of a patient with refractory epilepsy. This is a diagnosis that has to be considered when a patient is not seizure-free despite different trials of AEDs [3]. When we saw this patient, she was on more than three AEDs, and despite being on those medications, she went into status epilepticus.

We considered other therapeutic approaches to control seizures since there was a failure of medical treatment. After discussing the case in conjunction with neurosurgery and other specialties, the patient underwent surgery for a focal cortical resection. Since it was a partial-type seizure and there was a focus of hypoperfusion on the PET scan that was correlated with continuous spikes in the same area during electrocorticography, a cortical resection appeared to offer the best chance to control seizures in this patient.
Alternatively, other therapeutic options that may be considered for pharmacoresistant epilepsy include vagus nerve stimulation and the ketogenic diet [3].
There are different case reports and cohorts of patients with pharmacoresistant epilepsy in the literature [7]. They identify risk factors to recognize patients who are more likely to develop medically intractable epilepsy. Predictors include abnormal exam results, abnormal imaging, neonatal seizures, early age at seizure onset, and failure of the first AED to improve seizures or failure of the patient to respond to AEDs during the first year of treatment [1].

Epilepsy is a common neurological condition in childhood that is mainly treated with antiepileptic drugs (AEDs). Other therapeutic options include surgery, vagus nerve stimulation, and ketogenic diet when AEDs fail to achieve seizure freedom.
•Medically intractable epilepsy is considered when there is failure of trials of two or more AEDs which were adequately prescribed to control seizures.
•Patients who are not seizure-free are at increased risk of complications such as intellectual disabilities, poor developmental outcome, and psychiatric diseases.
•Focal cortical dysplasia type II is associated with medical intractable epilepsy. Its onset is often in infancy, and clinical manifestations depend on the cerebral cortex that is involved. Patients who fulfill the criteria for medically intractable epilepsy should be referred as soon as feasible to specialized assessment for surgery epilepsy.
•Surgery for epilepsy is currently a therapeutic option for medically intractable epilepsy in certain cases. However, this therapeutic approach needs an interdisciplinary group that assures an adequate assessment of the clinical case in order to offer the best therapeutic option for the patient.